One of the main reasons that I switched from using standard CSS to SCSS was to speed up my development of responsive web designs. I was deeply frustrated by the time and effort it took to get “pixel perfection” at all screen sizes.

Back in the days of traditional CSS, I would often quit after things were decent, but, in truth, I was stopping short of a quality job – and I knew it!

Here is my SCSS solution that solved these frustrations and greatly improved my workflow:

The above code is a SASS mixin that takes care of my media queries for me. To utilize the mixin during everyday work, I’m often coding something that looks like this:

A Little About The Code

In the past, I had learned that a “mobile first” approach was the best way to tackle responsive web design. This is why I chose to use the min width property rather than max width. (For more details, go here)

This solution lacks a quick and easy way to specify a custom break point. You are restricted to the set of defined variables above. Some developers may require that ability, but I have not found it to be a major issue. To compensate, I’ll just shrink my trouble spot a little more for a smaller screen and move on.

I was really excited when I finished crafting my media query mixins and thrilled when it started saving me so much time!

How have you done your SCSS media query mixins and what improvements could I make with mine?

Please let me know in a comment below. Thank you! 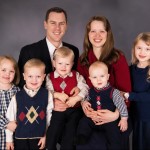 I am a husband, father, evangelist, web designer, and sometimes farmer. My family and I live full-time in an RV and travel around representing Servant's Heart Camp. My workspace is small, but the window view is great!

This site uses Akismet to reduce spam. Learn how your comment data is processed.